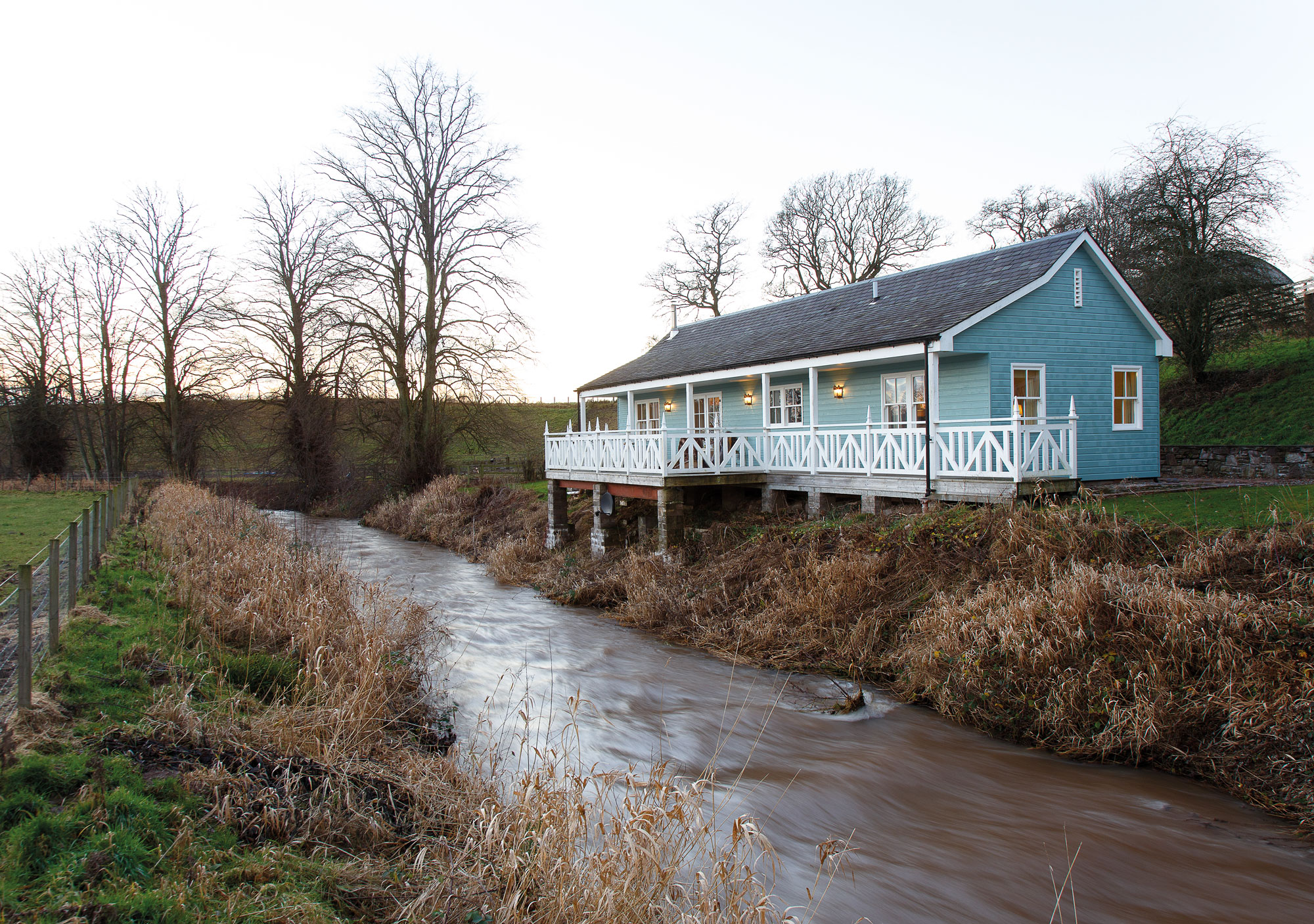 Waking up in her idyllic, riverside cottage on the family farm in Perthshire will be the perfect start to the seasonal celebrations for Molly Rowan Hamilton.

Having a job that can take her anywhere in the world at a moment’s notice made it difficult for Molly to commit to buying a property, even though she knew it would be a positive step. A work opportunity in Australia made the possibility of buying in London, a city where she is often based and loves having a foot in the door, an unnecessary expense, so instead she thought of Scotland, where she was brought up and where she knows her heart is.

‘My family owns a farm in Perthshire. There are a number of tumbledown outbuildings, which are a lot of work for my parents to keep up. So I ended up buying the Laundry Cottage from them,’ Molly relates. ‘The building was a wreck: it had literally been a laundry business, laundering both for the farm and for the wider area, until the 1960s. Wet and dank, due to its riverside setting. There were two huge vats for boiling up hot water for the laundry, from the stream beside it. We had used it as a Wendy house as children, playing endless make-believe games. I used to imagine it as my home as a child and now it is exactly as I had envisaged it!’

Painting and distressing furniture that you find in junk shops is good fun. I often find good quality pieces that are not to my taste, then upcycle them to make them work in my home.

‘My family owns a farm in Perthshire. There are a number of tumbledown outbuildings, which are a lot of work for my parents to keep up. So I ended up buying the Laundry Cottage from them,’ Molly relates. ‘The building was a wreck: it had literally been a laundry business, laundering both for the farm and for the wider area, until the 1960s. Wet and dank, due to its riverside setting. There were two huge vats for boiling up hot water for the laundry, from the stream beside it. We had used it as a Wendy house as children, playing endless make-believe games. I used to imagine it as my home as a child and now it is exactly as I had envisaged it!’

The wooden joists were completely rotten, the house had to be practically rebuilt, so it was quite an undertaking, but the building is so pretty, Molly felt it was well worth the effort. She chose to paint the clapboard exterior a spearmint green and added the white-painted wooden balustrade to enclose the veranda using a highly decorative pattern for the panels, finishing it with magnificent obelisks for a final touch of drama. ‘I sit out here all year round, just drinking in the scenery.’ The work was done by a huge variety of tradesmen who would come and go, and the project manager was someone employed on Molly’s parents’ farm. Flood proofing was a main challenge, initially forced by a burst pipe, after which Molly had to replace all the wooden floors with slate. Another prompt was over winter the river Pow, which runs beside the cottage, rose right up to the balcony.

She laid a wooden floor throughout, originally, choosing carefully so that it would be suitable for the underfloor heating, but unfortunately she experienced a flood from a burst pipe, so had to replace the floor in the hall and living-room. She chose slate this time, as a more hard-wearing and practical choice.

The wooden kitchen cabinetry was handmade by local craftsman, Gary Luke. ‘I was lucky to get a slot, he is so sought-after, but it was a relatively small amount of work, so he squeezed me in, he just made the sink unit and a built-in shelved cabinet, the rest of the kitchen is free-standing, bought on Ebay,’ Molly relates. The indulgent bathroom underpins the sanctuary feel of Molly’s Highland home. ‘I wanted the cottage to be a retreat from my London life and travelling.’

Natural fabrics such as linen tone equally well together whether you use strong colours or neutrals.

The artworks are by family friends, including pieces by Sassy Chalmers, stepmother to Florence Welch, lead singer in Florence and the Machine, who has stayed on the farm a few times as an artist-in-residence. ‘She has an obsession with the landscape around here. It is a wonderful place to come and paint,’ Molly explains. ‘The light is reflective and sometimes the bleak, haunting skies can have a real sense of foreboding, spooky almost, producing grey metallic light, unlike any other.’ Molly’s parents collect prints by Chris Orr, Royal Academician and professor of printmaking at the Royal College of Art, until he retired in 2008. He was a neighbour when they lived in London and she has hung a few of his prints here.

A knowing palette that combines a neutral backdrop layered with the very best Scottish linens and richly patterned textiles from destinations further afield has resulted in a rich, warm interior. Older salvaged furniture mixes well with the newer pieces and a few bespoke, fitted features save space in the bijou cottage. A high, vaulted ceiling ensures that the living-room has an extremely spacious feel: despite the small scale of Molly’s home, its pleasing proportions mean it never feels cramped. ‘It is perfect for me at this stage,’ she asserts.

The farm, Millhill, is famous for its breed of short horn cattle. The family of Scottish racing driver, Ian Stewart, started the pedigree breed. It was so highly prized that Greta Garbo bought one once. Molly’s brother runs an instagram account for the farm, called Millhills Farm, showing off the breed and the farm in general and a follower in New Zealand shipped one out recently. A bull costs £30,000. Molly’s great-grandparents bought the property from the Stewart family as a wedding present for her grandparents, due to its proximity to the Black Watch regiment’s HQ, with whom her grandfather was an officer. Her father was brought up here, but went to Oxford University and then on to work in the city, but returned here, to farm, with his wife, Georgina, when they started a family. Molly was a baby.

She loves returning to her country roots. ‘I was brought up with horses; my mum was a jockey when she was young. I rode competitively until I was 19, in eventing, and my brother lived in Argentina for a year working on a polo pony farm, living the life of a gaucho. I still love to ride and go out with a hunt whenever I can, locally here and in Dorset, when I am in London. I am loving my life as a freelance brand consultant and copywriter and the opportunities to travel that it has afforded me, but actually I think I do my best writing here, I find the landscape very inspiring for my work. My brother will take over the farm eventually, my two sisters both live in London at the moment, but I am definitely planning to return to Scotland if I ever do settle down.

‘Coming home for Christmas is always a special time, Mum will be seating at least 25 around the table on Christmas Day, just our immediate family is quite a crowd. The fact that I can escape down here and sit on the veranda in the winter sunshine or curl up by the fire for the evening will give me some peaceful moments and make the festive break completely perfect.’

Laundry Cottage is available to rent occasionally on Airbnb.