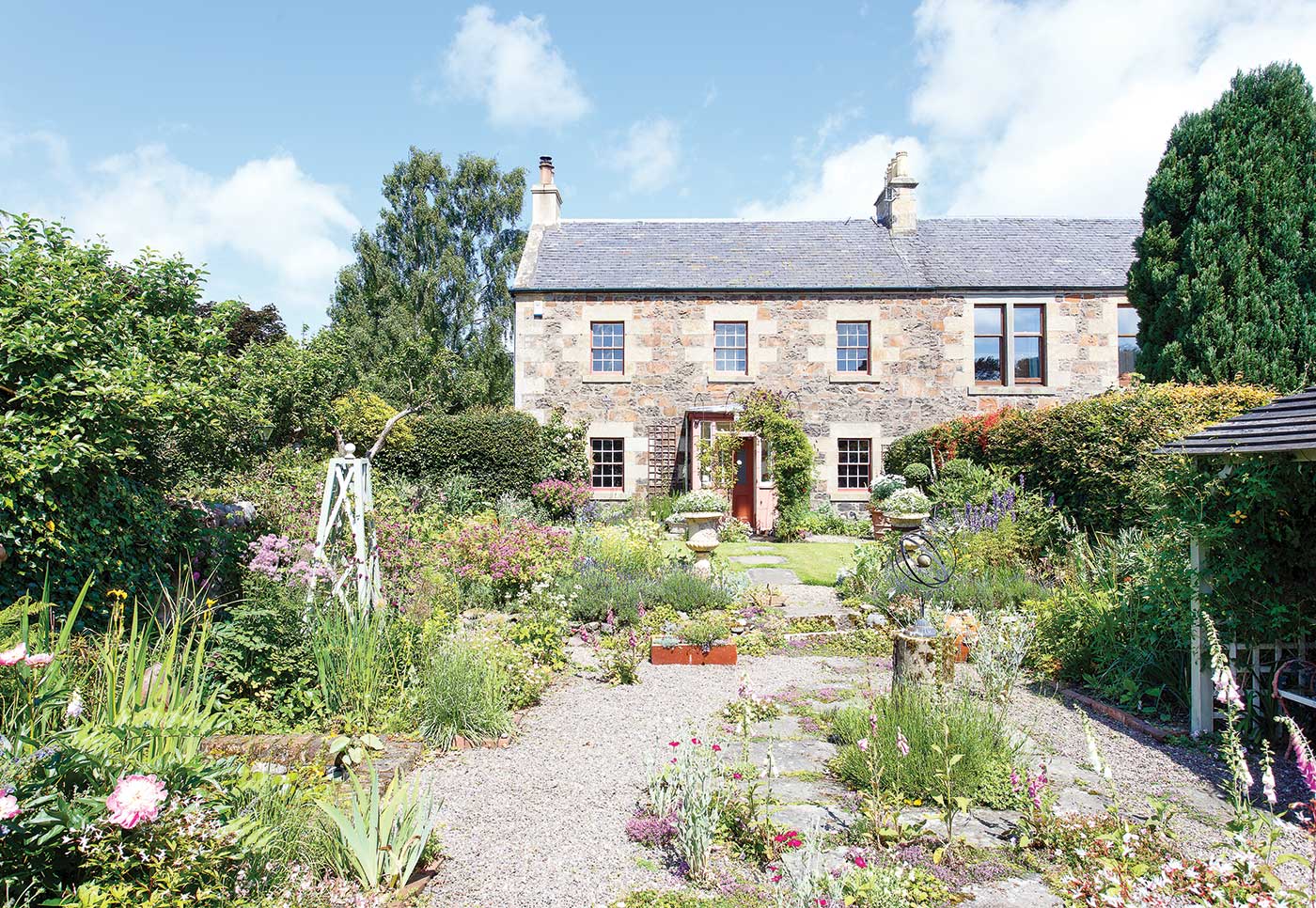 WOOD YOU BELIEVE IT

OWNERS
Jan and Doug Wightman, Jan is an artist, Doug a retired GP.

THE PROPERTY
Victorian semi-detached villa, four bedrooms. The size of the garden is a half-acre.

THE LOCATION
A small hamlet in Fife.

WHAT THEY SPENT
Very little: they did everything themselves over several years.

‘We bought the house on April Fool’s Day in 1974 and the joke, in the end, turned out to be that we had no idea how extensive the garden was. We went to the front door, on a dark winter’s evening, had a quick look round the house, loved it, and bought it. We assumed that the front garden was all there was to it.

‘We moved in and only then realized how huge it was. However, it was extremely neglected. The sellers had known they were moving for a while, so it was very untended. We got started straight away. We had never owned a garden before,’ Jan explains, ‘but I took to it like a duck to water, I could not wait to get stuck in. I took charge of the planting, Doug the structural stuff.’

The front garden was full of roses, and where the vegetables are now was given over to slides and swings when their children were small. There was a long tarmac drive that went right to the back of the house. Doug hired a pneumatic drill and a skip and started removing it as soon as he could. The garage that was located there initially was moved completely intact by a team of friends. It is now at the front of the garden at the end of a much shorter driveway.

‘There was already a stone wall that ran along the side of the front garden, and we planted a beech hedge to delineate the vegetable garden, edged on the opposite side by a row of espaliered apple trees. We added a conservatory and patio and built a rockery to create a further enclosed space and planted a woodland copse at the end. We built a workshop in the woodland just before Doug retired.’

The resulting spaces are varied: Jan describes them as ‘bitty and compartmentalised’ but each is well-defined and full of interest. Little paths lead you around. ‘We have an open garden every year and local children and our grandchildren love them,’ Jan shares. Artworks are dotted around, including sculptures in driftwood and metal, topiary and a pebble mosaic, all made by Jan. ‘I tried stone carving as well but found it harder on my wrists than I expected,’ she recalls.

We added a conservatory and patio and built a rockery to create a further enclosed space.

Jan is an instinctive gardener; she has never employed a garden designer. ‘I am not keen on Chelsea-style, modernist structures in gardens,’ Jan explains. ‘I love busy, cottage-style planting and rustic details,’ she adds, ‘rather than hard-edged, contemporary, concreted structures. I plant intensively: I do not like to see spaces between plants.’ Her plants all flourish, she credits this to the mild local climate and plenty of rain.

The glowing, intact, leaves of her hostas are thanks to the toads, who eat all the slugs, Jan suspects, and buckets of dishwater: ‘I never let it drain away and the hostas love to be drenched!’ The garden has grown and evolved organically. ‘I am very indecisive if I am honest,’ she admits, ‘and I have spent years doing it all wrong, then digging it up and starting again. I do a lot of planting and re-planting!’

They spend a lot of time in the garden in summer, ‘in fact I am not sure what we would do if we did not have it,’ Doug wonders, ‘there is always work to do, I can feel a bit lost in fact, when it rains!’ He oversees the vegetables now and the greenhouse. ‘I buy Franchi seeds online, it is an Italian company, based in Bergamo, in Italy. I get very good results from them. We are self-sufficient in vegetables,’ Doug admits, ‘we give a lot away as well.’

His workshop, in the wooded copse, where Doug makes musical instruments and furniture, is a brilliant haven. There is also a brick shed for Jan that she built herself. She learnt to brick lay specially when they sourced some bricks from a chimney demolished at a local mill. It has an arched window bought from an architectural salvage yard, a tricky detail for Jan. ‘The window was probably the most expensive thing in the garden,’ Doug quips!

There are benches placed all around the garden, some offer shelter from the sun, some catch it at various times of the day. ‘I sit on all of them,’ Jan confirms, ‘we work so hard in the garden, we like to be able to enjoy it from every angle.’